You’ve made a mistake.

You went somewhere no one goes. You opened the “employees only” door. You cried yourself to sleep on the bench of a forgotten bus stop. You closed dying eyes in a blood-soaked nightclub bathroom. You ran away from home and took a midnight subway ride in utter solitude. And now you’re here. You’re in the place where all the truly missing people go. You’re a face on the back of a milk carton, staring longingly at the normal world with a monochromatic rictus grin. You’re the nameless victim of an urban legend. You’re in the hell of neon and blood.

Infinite Kowloon is a combination OSR ruleset and setting of Urban Fantasy Horror. Imagine being lost in an unknown city late at night. Imagine your attempts to find refuge and familiarity are thwarted by twisted mockeries of what you are looking for. Imagine that city, the very concrete and asphalt, the glittering glass towers and dark alleys, every twisted urban legend hiding in its shadows, was alive and cruel. It hates you. It is god here. And it is infinite.

Eke out survival within this unending urban sprawl, a modern mega-dungeon where all the accomplishments of humanity are turned against them.  Find your way back to the mundane world, or lose your sanity and become part of this one.

In order to download this OSR Ruleset you must purchase it at or above the minimum price of $5 USD. You will get access to the following files:

Quick question: Is this file up to date? I noticed the changelog on another digital storefront says it was updated there on October 20, 2020. But as of today (October 31st), it was updated here on itch 58 days ago, around September 3, 2020.

It was indeed an older file, thanks for the reminder! I uploaded the most recent file for ya. If you have any more questions or concerns, just let me know.

Thanks for the quick response!

Unfortunately, the new version seems to have introduced some strange errors. There are box-like characters in place of random letters and numbers.

For example, on Page 77 of the updated PDF, the Common/Cheap table, the Use Die for Crowbar reads, "􀀀A".

In the previous version, on page 76, same Common/Cheap table, the Use Die for Crowbar reads, "NA"

The problem appears several times on that table. I searched for the glyph and it turns up in a few other places. Under Weapon Examples, "Wesson.􀀀weihander" and on page 97, Hair Salon, "􀀀oo"

I tried in both Adobe Reader and PDF X-Change.

How odd. Let me check. Might be a font  issue because it seems to be singling out specific characters.

Yeah it looks like a handful of letters and numbers were, for some reason, in the wrong font and it was confusing the thing for whatever reason. I think this should fix it now. Lemme know, it looks alright on my end. 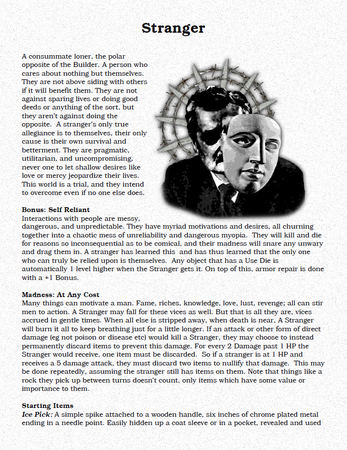 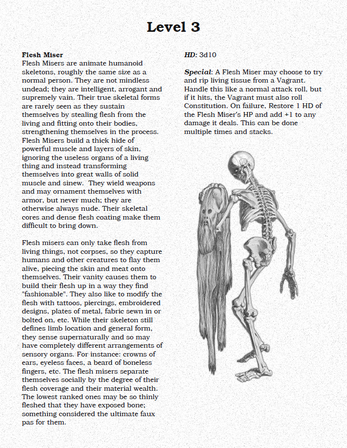 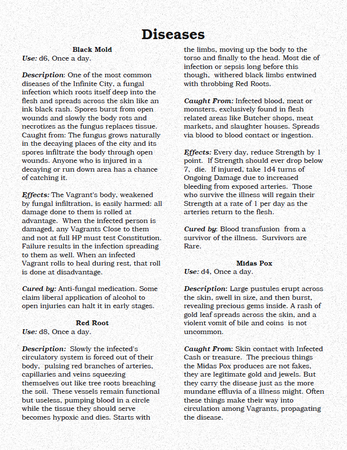